Last week saw the premiere of the much-anticipated Agent Carter mini-series, which Marvel is using to placate us in the hopes that we will forget about that little chunk of our collective heart that was ripped out by the Agents of S.H.I.E.L.D. mid-season finale. *sob*

But what a placation it is! This Monday treated us with not one, but two episodes to reacquaint ourselves with Peggy Carter in all her glory.  I could probably write a full thesis on the things that were done right in these first two episodes, but to spare you all the labor of reading it and my hands the labor of typing all that, I’ve cut it down to five elements of Agent Carter that I thought were done well. 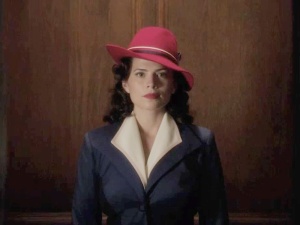 Note: in searching for an iconic image to encapsulate Agent Carter, it was incredibly difficult not to find one of her simply pointing a gun at the screen. I think this says something about what we require as a culture of our leading ladies. I much prefer this screenshot of her and her very jaunty hat. -Laney

4. …and in the face of that misogyny, uses it to her advantage.  The number of times in which blatant misogyny was turned back on its perpetrator (case in point: Chad Michael Murray’s inability to learn the alphabet — and yes he will always be CMM in my growing-up-in-the-2000’s mind, never mind what his character’s name was) never ceased to make me smile.  If the world is going to underestimate Peggy Carter, she will play into their mistakes when it is to her advantage to do so.  Guy buying the nitramene has a thing for blondes? No problem.  Claiming a day off because of “female problems”? Piece of cake.  It’s sad to say that, while it might not elicit the same degree of reaction in today’s society, even mention of periods is often still enough to draw a disgusted response.  Peggy’s awareness of this, much though it irks her, doesn’t stop her from using the knee-jerk reaction to stay two steps ahead of her colleagues.

5.  Peggy is both fallible and (eventually) willing to acknowledge her shortcomings.  Edwin Jarvis is a very important character in terms of the narrative, and not just through his connection to Tony Stark’s computer program.  Edwin Jarvis acts a foil to Peggy, and facilitates the viewers’ (and her own) perception of her flaws.   Peggy is used to doing things on her own, and to a certain extent, she has a point.  Her line of work can and does get people killed. She’s right to be cautious.  But by refusing to share in the danger, she’s being incautious about her own life.  Heroine though Peggy may be, she can’t do everything. And it takes some persuasion for her to see this, but that’s important. Her growth is begrudging, and as Jarvis is patching her up near the end of the episode, her acknowledgment of his point still isn’t done without a little eye-rolling. It’s authentic, it’s organic, and it makes Peggy all the more relatable.  Not to mention it gives us some fun moments between the “work-on-the-fly” Peggy and the obvious SJ Jarvis, which, as the daughter of a staunch SJ, just warms my heart and makes me giggle. (Go Google “Myers-Briggs typology” or “Keirsey temperament sorter” if the above sentence appears to be gibberish.)

In my initial approach to these reviews, I considered looking for tests to subject the episodes to, a la the Bechdel test. However, tumblr user xmenthefanficseries has kindly already put the show through ten common tests, which you can read more about here.  A lot of them play into what I liked about the show: that it’s smart, that it doesn’t rely on stereotype, and that it presents us with real, rounded characters that we want to support. Peggy Carter is not only the hero we want, she’s the hero we deserve.

What We're Talking About